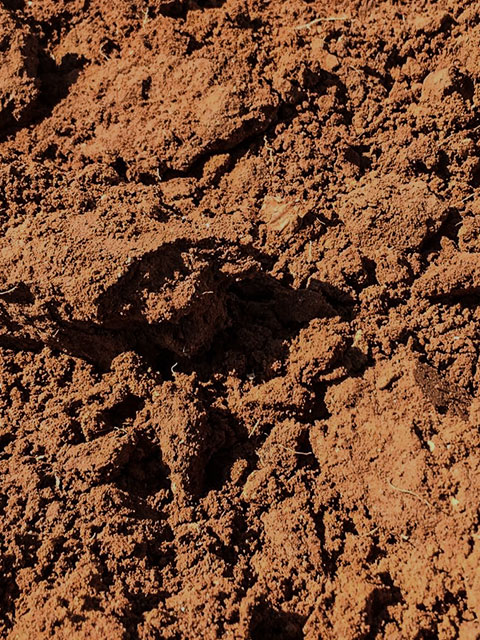 From the countryside of Dorilli, between the sea and the Iblean mountains, known as the centre of excellence for Sicilian food, comes our Cerasuolo di Vittoria. The name of the only DOCG in Sicily comes from ‘Cerasa’, cherry in Sicilian dialect. It is produced from the indigenous varieties Nero d’Avola and Frappato. A unique wine, recognisable and unforgettable for its youthful flavours and aromas of cherry, strawberry and pomegranate, due to the particular soil and climate in which the grapes are cultivated. A wine which like few others combines tradition and delicious wine. 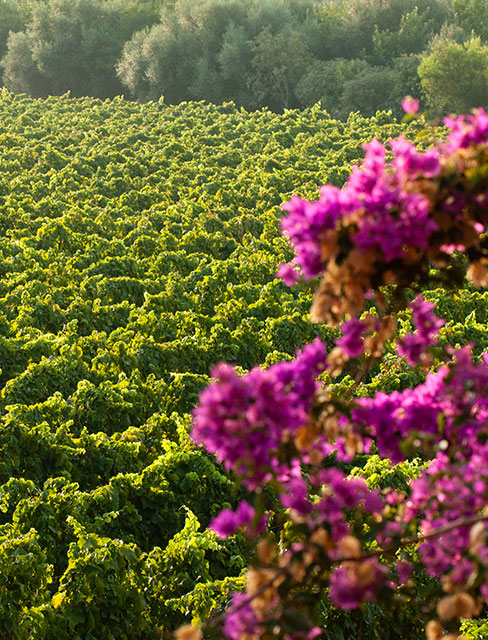 An extremely gastronomic version of Cerasuolo which we like very much for its meaty peppery notes.
An intriguing wine with an extraordinary vital energy based on wild fruits, wild strawberries, mulberry and pomegranate.
In the mouth the wine reflects its olfactory impressions and thus we happily re-encounter the black pepper mixed with carob and sweet cherries. Quick on the palate with a very savoury rounded finish with hints of mulberry.

Almost no rain in winter and spring. Low production and very good quality compared to the rest of Italy.

More rain than usual refreshed some of the crop resulting in reds with colour and body.

The 2006 vintage has been excellent with regard to the quality of the grapes. The grapes are sound, the yield generally about 10% down, though 20% lower for Merlot, Nero d'Avola and Frappato.This vintage can be described as luminous and sunny. All the sun-loving varieties such as Syrah and Nero d'Avola are of extraordinary richness. The whites are rich, creamy, and well-defined by type of grape.

We were cheered in 2006 by an autumn finishing with good October rain that prepared the vines well for their autumn and winter rest. A relatively mild winter followed with temperatures that were never very low and a lower than average rainfall. A weather pattern that coincided with the rest of Italy, with the difference that mild winters are the norm in our area. This winter did make us fear for the summer reserves of water, but then in spring an unusually plentiful rainfall covered the whole of our region until the beginning of May. This is why in Sicily we had no expectations of an early vintage but, until mid-July, we were thinking rather of a late vintage. From July onwards, the most important time for deciding quality, the weather was particularly propitious. After two short but intense heatwaves, typical for the period from 20th July to 15th August, it stayed fine, temperatures stabilized, and persistent high pressure presented us with a vintage with no rainfall the first slight shower arrived on 25th September! and with amazing maturation. For those who enjoy comparisons, in our reckoning the recent years most similar to 2007, in Sicily, are 1997 and 2001.

The 2008 vintage ended on Saturday, 4th October. Late in autumn and during winter 2008, rains were just below standard; temperatures, instead, were within seasonal average. Spring confirmed what had happened previously, no abundant rains; the last one, at the end of April, was decisive for the quality of grapes.Therefore, grapes had a fresh and dry climate all the way to the harvesting, without any excessive heat, but with ideal temperatures for ripening. grapes were absolutely wholesome, and did not need to undergo any phytosanitary defence interventions. The result was a superb vintage, the indigenous varieties are absolutely excellent. Syrah is just perfect: a dry and luminous vintage provided us with a superior quality. The other French varieties are intense and varietal; the Nero d'Avola, the part of La Segreta Rosso blend, is at its top.

The seasonal pattern showed a fall and a cold winter and little rain, while the spring period was characterized by heavy rains even in the pre-summer. The vineyard went into the summer and maturation in perfect health. The average summer temperatures has been excellent: pleasantly cool, regular, without peaks of heat, never above the seasonal average. Balanced solar radiation. The harvest began with a delay of about 10-14 days (August 17).

The climatic conditions prevailing during the 2010 harvest were particularly favourable. In 2009 the autumn finished with abundant rainfall, ideal for setting the vines to rest. The winter had normal temperatures and not too much rain. The spring was also average, with rain at the end. The summer began with cooler temperatures until the middle of August, when the temperature then rose to assist perfect ripening. Around 20th September rain assisted the harvest at Vittoria.

The 2011 vintage yielded perfectly healthy grapes, if in noticeably diminished quantities. Indeed quantity as well as size of the harvested fruit was reduced by 15 percent on the average, which means also a decrease in total weight. In any case this resulted in an exceptionally high overall quality, especially of the red grapes which profited greatly by this natural and thus perfect thinning out. The temperatures stayed in the average range and, more importantly, showed no heat spikes. Both September and October were mild, and sporadic rainfalls at the end of the season accomplished the vintage.

The harvest was completed on October 12th, earlier than usual. In general, the grapes are extraordinarily healthy thanks to the lack of rainfall near the harvest. The amount is 10% higher compared to the 2011 vintage that was particularly poor, about 5% below average. Outstanding quality was achieved in Noto and Vittoria, excellent for red wines in Menfi and Sambuca and average for white wines. It is too early to judge the grapes of Mount Etna but we can say that they are much healthier and intact than normal at levels above average in the area. The final judgment on the 2012 vintage is more than positive with peaks of excellence in Vittoria and Noto and in Menfi and Sambuca for the red wines.

The temperatures in late spring and summer were very balanced without excessive heat. Thus July and August produced the ideal preparation for aromatic white wines and intense reds. In the second half of August some rain arrived, more to the west than the east, reviving the harvest and extending ripening of the red grapes. There was little rain at Noto and Vittoria, providing a boost for the grapes which ripened perfectly providing a superlative vintage for these areas. After the cold wet month of September, the second half of October was splendidly sunny which chased away any fears and provided a vintage which is still to be proved.

Dry harvest and rich and intense wines helped by the decidedly milder temperatures in July and, in general, in the whole vegetative period. For July-September it is the vintage with the most sunshine (light required for the grapes to ripen) together with a July-September period either below average or average for temperatures. September with little rainfall forced us to wait a little for the harvest, thus the ideal conditions for the ripening and the tardiest harvest of the past few years. In search of the perfect balance.

A super vintage in the south-east. An extraordinary harvest at Vittoria for aromas, colors (which are not the strong point of this district) and balance, thanks to the climatic conditions in our marine areas.

The territory of Vittoria , as in all the south-east, has suffered an extraordinary lack of rain after good rainfall in 2015. Emergency irrigation during the summer (which we always consider an indispensable agricultural practice and, if well managed, fundamental for the quality of grapes and wine), some good rain at the beginning of September and a generally cool summer saved the harvest. As a result the grapes were extremely healthy, giving us a lower production but with rich coloured wines; Frappato, with particular aroma and colour and better results than the Nero d’Avola, which is a little stiff but also has fascinating tones and floral notes.

INGREDIENTS
Makes about 25
For the rice
500 g / 1 lb. 2 oz. Carnaroli rice
1 L / 1 qt. water
125 g / 4 1/2 oz. butter
35 g / 1 1/2 oz. onion
1 celery stalk
1 carrot
5 g / 1/4 oz. saffron
50 g / 1 3/4 oz. Grana Padano DOP
salt to taste
For the filling
600 g / 1 lb. 5 oz. beef, diced
500 ml / 17 fl. oz. tomato sauce
1 kg / 2 lb. 2 oz. onion, minced
200 g / 7 oz. tomato paste
100 ml / 3 1/2 fl. oz. aged wine
100 g / 3 1/2 oz. peas
300 g / 11 oz. Primosale cheese
150 ml / 5 1/2 fl. oz.
extra-virgin olive oil ground cinnamon
salt to taste
pepper to taste
For the coating
pastry flour
2 beaten eggs
200 g / 7 oz. breadcrumbs
DIFFICULTY 4/5 | PREPARATION TIME 2 hours
In a large pot, bring the salted water, onion, celery and carrot to boil. Turn down the heat and let cook over a low flame for at least 30 minutes. Filter the vegetable stock, then add the saffron. When the water is dark yellow add the rice. Cook over medium to high heat until the liquid has evaporated. The rice will be al dente. Pour the rice into a large baking dish, add the butter and the grated Grana Padano and blend well. While the rice cools, prepare the filling. Heat some olive oil in a pan and add the minced onion. Add the meat and let brown. Add the wine and bubble up to evaporate the alcohol. Then add the tomato sauce and the tomato paste. Add salt, pepper and cinnamon to taste and cook over very low heat. Prod the meat with a fork to make sure it’s tender. Blanch the peas, then drain and add them to the meat. Lastly, add the Primosale cheese cut into small cubes. Take a small quantity of rice and flatten it in the palm of your hand. (Wet your hand before to stop the rice from sticking.) Make a well big enough for a small amount of stuffing, then close the rice over to form a ball. The stuffing should be equal to two-thirds the weight of the arancino, the rice one-third. Moisten the rice balls with water, dredge in the flour, dip in the beaten egg, and finally coat with breadcrumbs. Fry in a generous amount of oil until golden brown and serve hot.